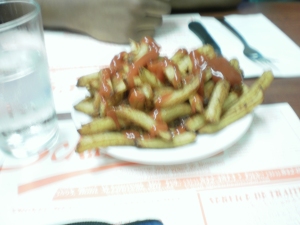 Yesterday was probably the most adventurous of the whole trip. We tackled the streets of Montreal. On our own. Without a tour guide. Just Diallo, me and a tourist’s map of the city. The map was in French.

First stop – Marche Jean Talon. (There should be an accent over the “e” in Marche. But I’m too American to figure out the keystroke routine to make that happen.) It’s the largest outdoor market in the city. It is the fresh produce smorgasbord of my dreams.

This is another location where no one picture would ever do it justice. If you love food, you must come here. Think rows upon aisles of fresh fruits and vegetables lined up by type and color everywhere. (I even saw a purple bell pepper. Who knew?) Imagine every cheese imaginable that clearly looks handmade on display.  Picture handcrafted chocolate goodies, some with flecks of actual gold sprinkled on them, next to the actual hard-to-find ingredients to make them yourself. And then there’s the meats… O. M. G. All the sausages I saw had to have been hand ground, hand blended and hand stuffed. I wish we had a stove back at the hotel so we could have tried them.

What we did wind up trying were some drinks from the juice bar. I had the Mimosa – strawberries, lycee and rosewater. D had the Mango Tango – mango, peach and orange. He also snagged us some meat pies from the Moroccan vendor. We had a salmon one and a merguez one. The salmon one tasted like a salmon cake baked into a flaky crust. I had tasted merguez one time before from The Spotted Trotter in Atlanta. Surprisingly, the one made by the Moroccan guy was less spicy than the one made by the American. But don’t get it twisted, it was still very good.

We also made a stop at the ice cream spot in the market. That’s where I introduced Diallo to his new favorite flavor, mango lassi.

Second stop  – Schwartz’s Smoked Meat. Every online food “authority” we consulted advised that Schwartz’s was the place to visit in Montreal. They were soooo right. I prefer my fries just short of burned. So I was ready to roll on the floor in glee when they brought out a plate of brown fries. They were still soft so I know they didn’t double fry them like the Belgians do. I have to make a return trip to Montreal to figure out their secret.

The real star of the show was the smoked brisket sandwich. You have a choice of fatty, medium or lean versions. I’ve been on a cholesterol bender all week so I played it safe with the medium. As you can see here, the “medium” has a nice amount of fat. I’d hate to see what the fatty version looks like.

On a side note, we took the train to the Saint-Laurant station to get to Schwartz’s. Please keep in mind that the walk included at least two fairly steep hills to get there. Thank goodness there was a gas station halfway where we could rehydrate. Would I do it again? Yessssss.

We bought a baguette loaf and a can of Portuguese sardines on the way back to the train station. It cost us about $3.25 total. It made a nice dinner later when we returned to the hotel. They weren’t salty at all. They melt in your mouth. We discovered an extra treat when we used the leftover bread to sop up the olive oil in the can.

Stop three – Place d’Armes. We went here to see the Notre Dame Basilica. We arrived too late to take a tour. Instead, we sat outside and marveled at the surrounding architecture. Again, the pictures could never be an adequate substitute for the real thing. This is yet another reason that we must return to Montreal.

We are newly weds who spent a lot of time eating, cooking and traveling together. We also like to write.
View all posts by teamtyson